November 29, 2014
This picture is almost correct explanation for today's (29-November-2014) three years low oil prize i.e 72$ from 115$.
OPEC (Organization of the Petroleum Exporting Countries) is group of Oil producing countries and logically they includes Arab countries and some African countries. OPEC provides forum to oil producing countries to lower/increase oil production and oil prizes.In seventies it had dominance of foreign oil companies but later God given sense to Oil  producing countries government and now they have dominance(just to say). Though OPEC decides oil prizes and extraction , but it's acceptance depends on will of it's members.
Now you will understand that in Seventies Oil Crisis had happened because OPEC countries had put oil supply limited in practical term it is called embargo.So all oil consuming countries mainly US at that time (now position is replaced by India,china) stumbled for oil and their economy had collapsed.In simple term their economy had almost paused.So from that day US decided that their policies should be designed so that to reduce oil dependency and they had put money from oil alternative research and they found shale gas. Now US uses 20% shale gas and they have target up to 80% in 2015 and complete oil independent in 2050.
Now you understood  complete background (I hope!). Now look at picture and you will understand complete picture and its relevance to today's low Oil prize situation. Frankly , I took this picture from Economic Times. 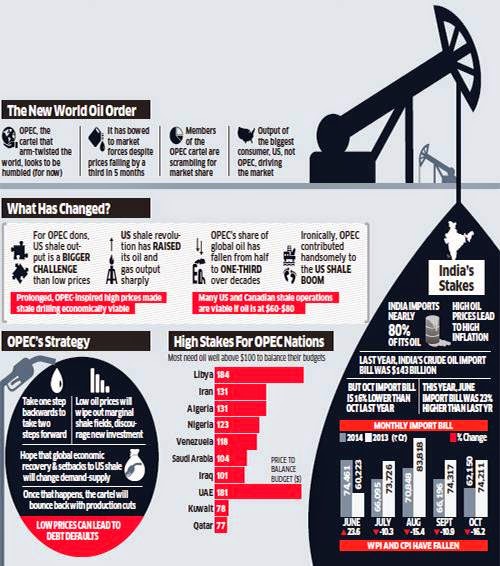 So you may ask question why are we paying same prize on petrol in India though it is deregulated?
Yes , international petrol prize has reduced and our (Indian) government also made petrol deregulated means its prizes are linked to market prize and government has no control over petrol prizing.
But yet we are paying almost same rupee for petrol because government increased excise tax on petrol. Government made statement when increasing excise duty that this increase is to cover earlier subsidy gap. But in economic sense this increase is good for us.
If we get low price petrol , we will opt other alternatives and we may increase dependency on petrol and off-course it is not good for economy and environment. It will put us in crisis in future when again oil gains its prize.

Popular posts from this blog

Get Browser Name and Version in Javascript

May 19, 2014
JQuery stopped providing $.browser function after 1.9 release.So you have to write your own code to get know browser and its version.There is not standard procedure or code to achieve this.
But I will show you to get browser name and version of  IE > 6, Google Chrome And FF.

Here we have AGENT to rescue.Every browser has navigation object available in its script.In this object userAgent field contains current browser information.

So you can ask me What is User-Agent?How will it help us?
As I said earlier it contain browser information.There is not standard to show each information but almost every browser support it.
There is complicated history behind user-agent variable.But in simple sense we can say that user-agent is used by server side component to get information of client-side browser and its compatibility to page it will going to rendered.So we conclude that this user-agent information is little bit 50% same in all browser.

Share data between Iframe and its Parent using JQuery

November 04, 2014
There could be requirement that you have to pass variables values to Iframe from parent or in other scenario you have to pass values from Iframe to its parent.I am going to show simple example of above situation with the help of JQuery.
Support we have parent HTML page having iframe included like below

Spring Default Limit for Collection and Array is 256

December 21, 2013
If you are working in Web Application Development then you may stuck or already had ,then you will get mad of getting this error


java.lang.ArrayIndexOutOfBoundsException:Arrayindexoutofrange256
How this error emanates in Spring?

i will explain you with example.Suppose you are adding Values in List in JSP using JSTL tag or other.
This list is in Form(HTML).When you POST this form,In behind Stage,Spring does binding of Object and List if present.

But wait...
In Spring,Default limit for array and collection growing is 256.

Why this limit is Set?

seldom you have to send List size greater than this limit.
Spring has set this limit to avoid notable OutOfMemoryErrors in case of large indexes.

So,than What if i want to set Collection greater than this size?

I had told earlier,spring does binding behind.If we tell spring to increase it's size or set collection size behalf of spring.
You you can do it.

We have initBinder,  in Spring  it is called when spring does the binding mechanism
e.g @Mod…
Read more